British high streets are subject to unstable and challenging socio-economic conditions brought about by the 2008 recession, high business rates, competition from online retailers and now the COVID-19 global pandemic. With Britain once again slipping into a recession, this is a crucial time to quantify the changing composition of retail areas and plan for future transformations. Whilst some high streets are consistently struggling to fill vacant stores, changing working patterns may provide a redirection of disposable income to smaller towns’ high streets.

This blog post explores the resilience of commuter towns to gain an understanding of the possible magnitude of change to the local population and retail structures. The research aims to assist in recommendations for the opportunities and threats that will face local authorities for commuter towns in the next few years.

The project used a variety of different open data sources and the Local Data Companies data on Retail Type, Vacancy and Address Data. The commuter towns were selected as those surrounding the 4 major cities of London, Birmingham, Manchester and Leeds. The towns were selected for their applicability to the Office of National Statistics’ definition of ‘major towns and cities’, which defines them as having a minimum workday or resident population threshold of 75,000. The towns surrounding London have been selected where the commute time is less than or equal to 60 minutes and the towns surrounding Birmingham, Manchester and Leeds have been selected where they are less than or equal to 20 miles away. 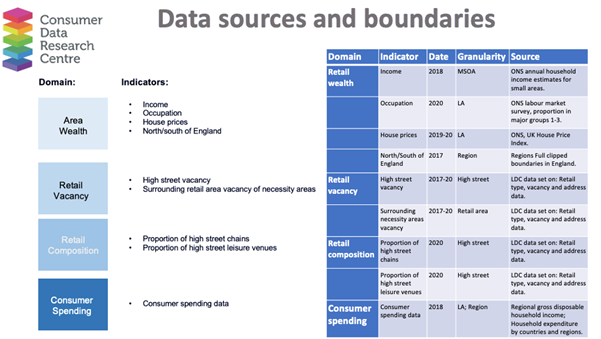 In order to create the resilience index, a method for creation of a multi-dimensional indices was devised through adaption of The Ministry of Housing, Communities and Local Government’s (2019) ‘English Indices of Deprivation’ and the Consumer Data Research Centre’s (2019) index of ‘Access to Health Assets and Hazards’. Therefore, the data sources for each commuter town were individually ranked and re-ordered. Next, the data was transformed using the Rankit rank-based normalisation to enable the merging of the rank-based indicators.

Following on from the development of the commuter town resilience index, the project explored the retail composition and performance of Guildford high street (most resilient) and Rochdale (least resilient). Retail area classifications have been built based on England’s retail lockdown restrictions in order to determine which areas were able to predominantly remain open throughout the majority of 2020 (Hill and Cheshire, 2021). The retail boundaries were built through adaption of Pavlis et al.’s (2018) modified DBSCAN clustering method using data provided by the Local Data Company (LDC). 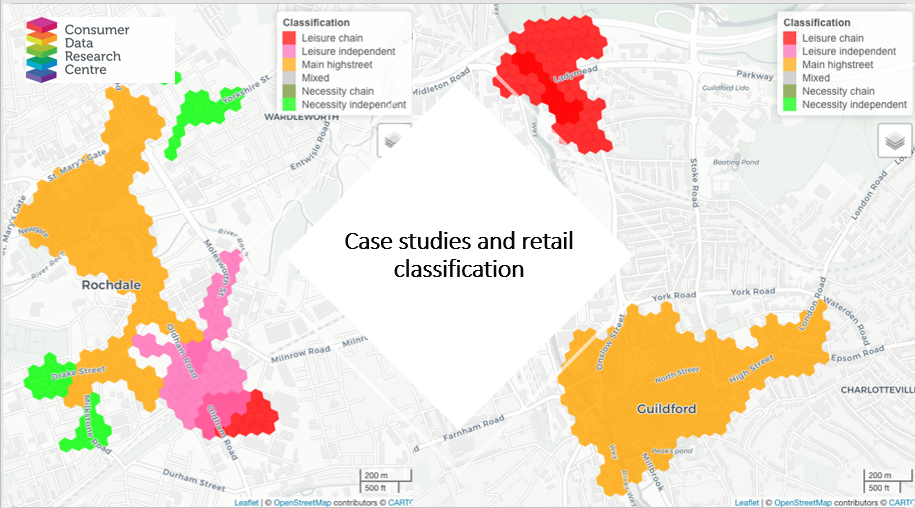 Classifications for Rochdale and Guilford

The boundaries of the retail areas have been transformed into H3 format, which is Uber’s (2018) Hexagonal Hierarchical Spatial Index. The system takes data points and buckets them into hexagons, which allows for easy approximations of radiuses. The classification system displayed includes small leisure and necessity areas and is based on the distinction between stores which were and were not allowed to remain open during England’s COVID-19 lockdowns. This is a useful tool to map changes in retail performance and composition following the global pandemic.

In order to compare the retail structures within the case study high streets, Pavlis et al’s (2018) modified DBSCAN clustering method and hierarchical clustering with spatial constraints have been applied. Restraints were chosen to fit the Ordnance Survey’s (2019) definition of a high street; namely, “a cluster of 15 or more retail addresses within 150 metres, linked to roads” Subsequently, the Local Data Company’s was used to devise a measure for vacancy in Quarter 1 of 2020 and a rate of occupier change between Quarter 1 of 2017 to Quarter 1 of 2020.

One area of interest in Guildford high street is the North Street area. There are disproportionate levels of vacancy – a trend which has persisted throughout 2017-2020. The area has seen some consumer-based cultural changes with closures of music stores, the main post office and the bank Santander. These vacancy rates contrast to the nearby successful Friary shopping centre which contains strong global brands. The area is target of the North Street Regeneration project. Our research suggests that the project should be wary not to rival the pre-existing successful nearby areas. 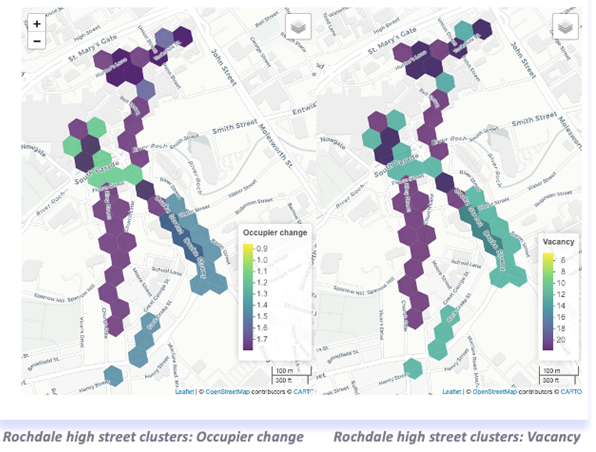 Rochdale’s high street, which ranked last in the commuter town resilience index, has clusters within the high street have high levels of vacancy and occupier turnover. In particular, Drake Street, an area which might need particular attention when it comes to an intervention strategy as its consistently low performance can been seen to have been exacerbated by the 2008 recession. Consequently, the area is likely to be hit in a similar way by the current pandemic-induced recession. The Rochdale council’s regeneration programme, which includes the Drake Street area focuses on revamping shopfronts to bring out their heritage. Such efforts and expenditure may have increased impact to the area unless stability-promoting store types and a more characterful composition are introduced.

The applications of this project are multiple and multi-dimensional. Recommendations for those commuter towns that are less resilient may be made to try and harness a new increase in the working from home population. In addition, despite the economic strain felt by Britain’s high streets, which has only been exacerbated by the COVID-19 pandemic, the resilience index has shown that some commuter towns may benefit from harnessing home workers’ disposable income. The continued future success of these areas may be dependent on decision making aimed at providing services and retail spaces - in particular, necessities which accommodate the area-specific population.

‘This was an extremely valuable piece of research to Retail Economics which focused on a very important emerging trend in the industry. The research was timely, relevant and forward looking. The process was also well-managed and all stakeholders worked together well to add value in their respective areas of expertise.

In particular, Abi was well organised, enthusiastic and a great communicator which helped keep the project on track and delivered within the time scales set out at the start of the year. The final presentation of the research was delivered in an engaging and succinct manner, aligning very much to the business community.

We will look to leverage value out of the research in our internal analysis to assess the impact of Covid-19 on shopping habits with a particular focus on the commuter belt. There is a depth of quality and rigour within the research that provides confidence in the initial findings that we can share with our clients. Overall, an excellent piece of research. ‘